In the HVAC field understanding, the electrical theory is by far one of the most difficult areas of study. One of the key concepts is Ohm’s Law. Back in the 19th century a German physicist name Georg Ohm discovered the relationship between voltage, resistance, and current in an electric circuit.

Just like any algebraic equation if any two of the three values are known, the third value can be calculated. The following are the three most commonly used Ohm’s Law equations:

In the example above if:

There is an easy way to remember these three basic equations by using the Ohm’s Law wheel shown below: 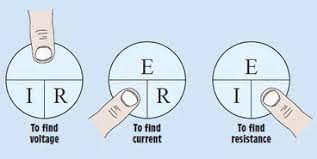 Current – the rate of electron flow through a circuit.

Voltage – the force that “pushes” the current through the circuit.

Resistance – the opposition to current in a circuit

Current in a circuit is directly proportional to the voltage… the more voltage the more current.

Current in a circuit is  inversely proportional to the circuit’s resistance… the more resistance the less current.

Ohm’s Law is just the tip of the iceberg when learning the fundamentals of electricity, but it is one of the most important concepts. Our online HVAC classes teach you everything you need to know to become a top notch electrical troubleshooter. For more information about our online HVAC courses please call or email.

After retiring from the U.S. Marines and achieving his B.S. degree, Ron Walker entered the HVAC field. He has been an HVAC technician, service manager, and business owner. Working as a service manager, he spent many years training HVAC technicians to be more technically competent and really understand their trade. His passion for teaching and helping others resulted in the creation of HVAC Training Solutions, LLC.