The refrigeration cycle for medium temperature walk-in coolers is exactly the same as residential air conditioning systems. However, the operation of the physical components is slightly different. 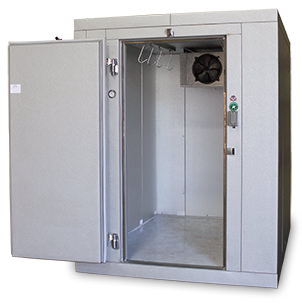 All of the walk-in cooler configurations below have this in common:

Commercial refrigeration system is controlled by a close on rise in temperature thermostat. You will find either a mechanical type with a sensing bulb or a digital thermostat with a thermistor. Most of the walk-in coolers that require repair will be older and may have been retrofitted with a digital thermostat.

As the box reaches temperature, the thermostat opens, de-energizing the compressor and condenser fan. REMEMBER – the evaporator fan(s) run continuously circulating cool air through the cooler whether or not the compressor is running.

This is called an off-cycle defrost system.

As the temperature in the cooler begins to rise so does the suction side pressure. Once the pressure reaches the cut-in point the pressure switch closes, applying power to the compressor

This is also an off-cycle defrost system.

This type of system is usually found where the condensing unit is located outside and the outdoor temperatures could drop below the cooler temperature.

In this system there is both a solenoid valve and a low pressure cut-out switch. The cooling thermostat (mechanical or digital) controls a solenoid valve connected to the liquid line inside the cooler. The solenoid valve is usually located in on the back side of the evaporator.

The low pressure cut-out switch is used to energize and de-energize the compressor.

The thermostat is set to de-energize power to the liquid line solenoid at 35°F cooler temperature. When the solenoid is de-energized, it stops the flow of liquid refrigerant to the expansion valve and the evaporator coil.

Once the cut-out pressure is reached the low pressure cut-out switch de-energizes the compressor. The evaporator fan(s) run continuously circulating cool air throughout the cooler.

During the off-cycle, the Commercial refrigeration temperature will gradually increase to the cut-in temperature of the thermostat (usually 38-39°F). When the thermostat closes it energizes the liquid line solenoid. This releases the stored refrigerant into the expansion valve, coil, and suction line. Once the suction line pressure reaches the cut-in temperature of the low pressure cut-out switch, the compressor will start and the cooling cycle will begin.

This is called an off-cycle defrost system with an automatic pump down cycle.

After retiring from the U.S. Marines and achieving his B.S. degree, Ron Walker entered the HVAC field. He has been an HVAC technician, service manager, and business owner. Working as a service manager, he spent many years training HVAC technicians to be more technically competent and really understand their trade. His passion for teaching and helping others resulted in the creation of HVAC Training Solutions, LLC.